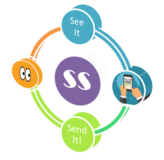 The application allows users to submit tips and/or capture images, video or audio of suspicious activity directly to the Rockport Police Department. Individuals may choose to identify themselves or remain anonymous when sending information. The program offers examples of suspicious activities ranging from the obvious to materials acquisition and security testing. Users can opt to receive geo-fenced alerts from the police department about current or past suspicious activity, warning about potential criminal activity and alerts regarding missing or endangered persons in the community.

While this service is not meant to replace 911, it offers a speed button to call 911 should a suspicious situation become obviously dangerous to parties involved or the general public.

Additionally, the application offers a special feature - 'Chameleon' - that allows the user to disguise their reporting of suspicious or criminal activity IF contact is made by the party being reported. Once selected, the app will change to a commonly played app game AND, if set up as such, also activate the devices audio recorder, video camera or both. The chameleon app disguise can later be cancelled, and the app user can reactivate the See Something, Send Something app to finish reporting the suspicious activity while including any recorded statements or activities by the party be reported.

“See and Send” is available from the respective IOS and Android app stores. After downloading the secure application, residents will be asked to create an account, which will be linked to the Rockport Police Department. While there is no charge to download or use the application, standard data rates apply. Individuals should be aware of their carrier’s data plans and rates.

For individuals who do not have smart phones, you may use this link

Get help after downloading on your smartphone.