Voices from the Past - The Time Capsule

The time capsule from the 1970 sesquicentennial was unearthed from its burial place prior to the demolition of City Hall and taken to the Service Center. The capsule was a stainless-steel tube, approximately 48 inches high and 18 inches in diameter and was placed inside a concrete vault. Despite the lid being tightly fastened and no apparent means for water intrusion, most of the contents were wet and there was an accumulation of water at the bottom, likely from condensation. Due to the moisture, many of the items were dirty, rusted, and generally in poor condition; however, many items did survive.

The contents included many pieces of news media, budgets, audits, letters, coins, photos, etc. Staff has worked diligently to save as many items as possible from the time capsule and plan to bring forward different pieces for recognition and display these items to the Council and public over the next several months

Among the items restored were a cassette and reel-to-reel tapes that have been transferred to mp3 format.

The 1970 pageant depicting Rockport’s history in five acts.  More than 300 residents participated in the show. 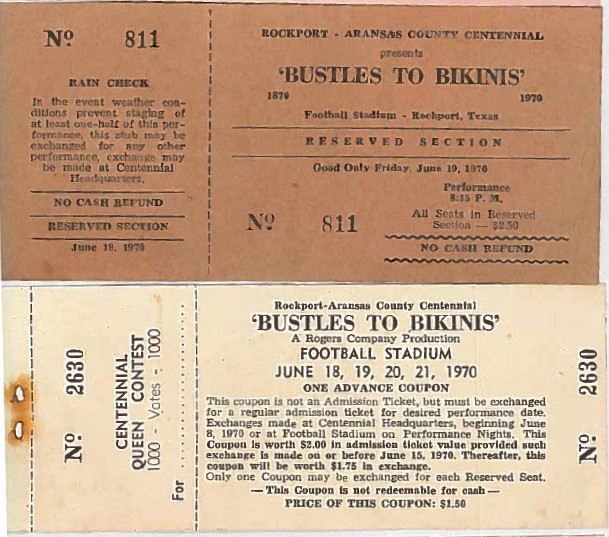 Delivering a Message from 50 Years Ago

A letter, along with other items, were left by J.W. Harden and his wife, Agnes Anton “Tony” Adamson Harden to their son Adam Jay Harden.  Click here to view the entire letter. 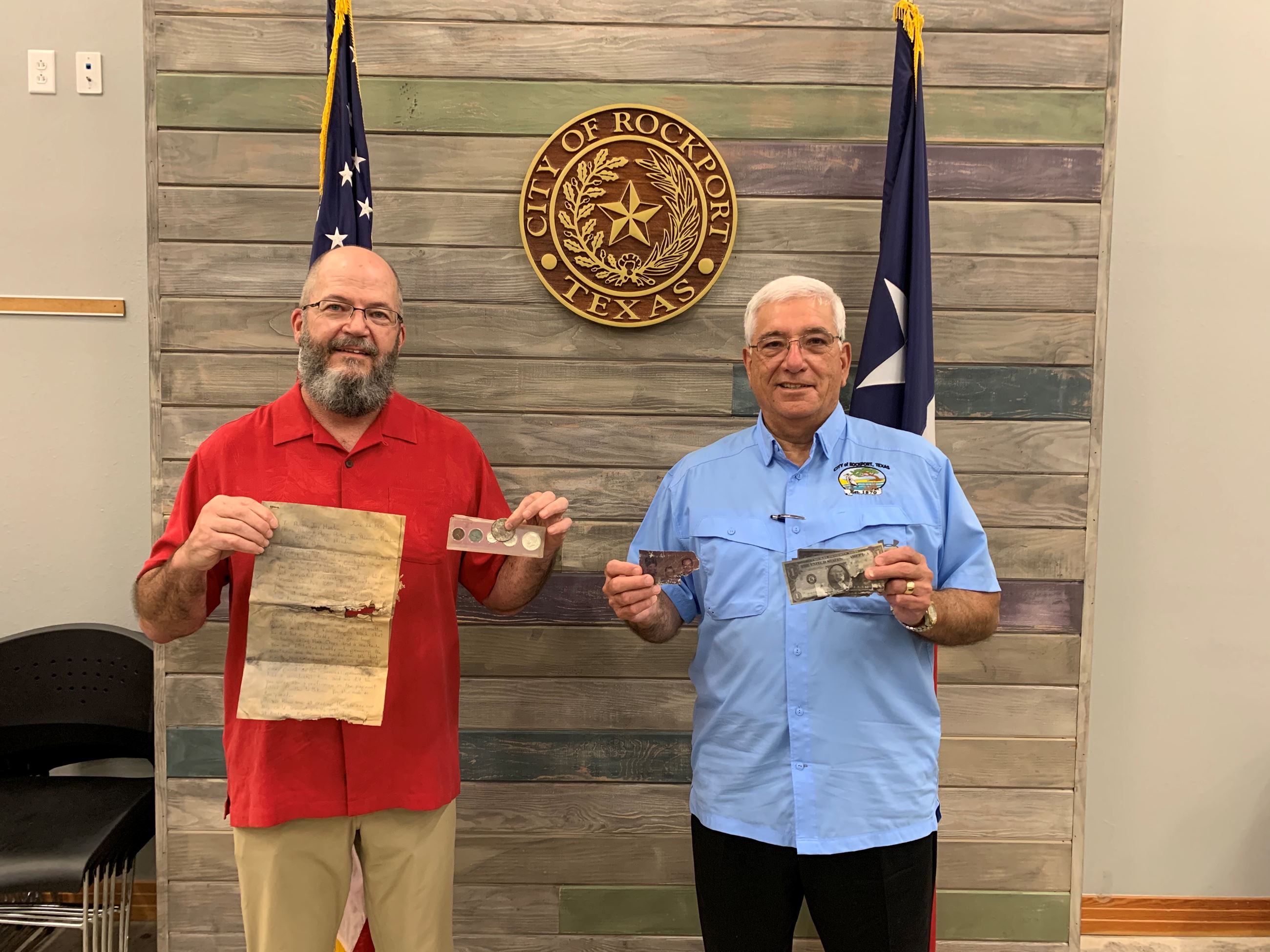 Jacqueline “Jackie” Ann Plummer Hattenbach receives a ring she placed in the time capsule 50 years ago.  Interestingly, this was done before she became an employee of the City of Rockpport having spent almost 30 years within the Parks and Recreation Department. 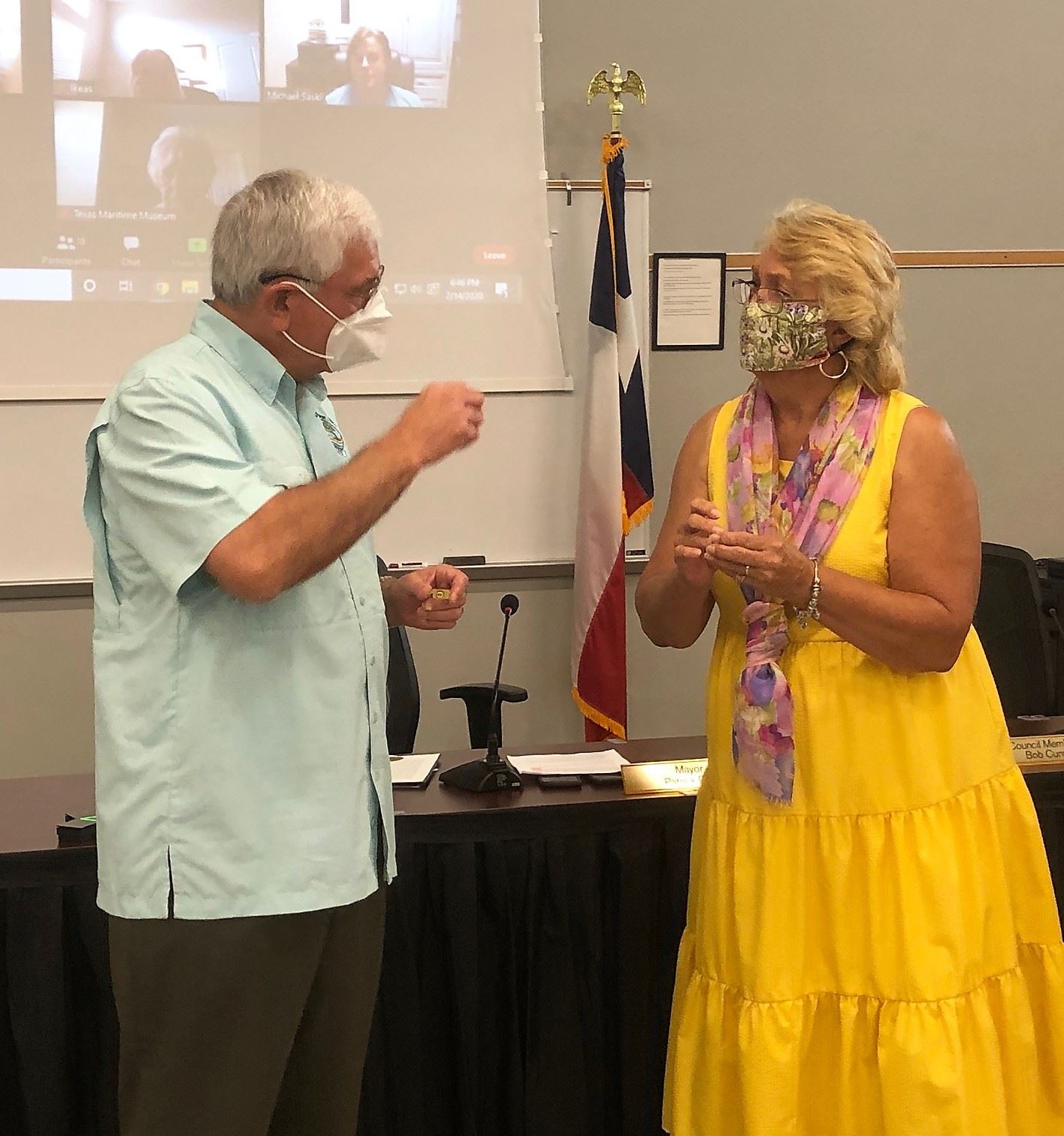 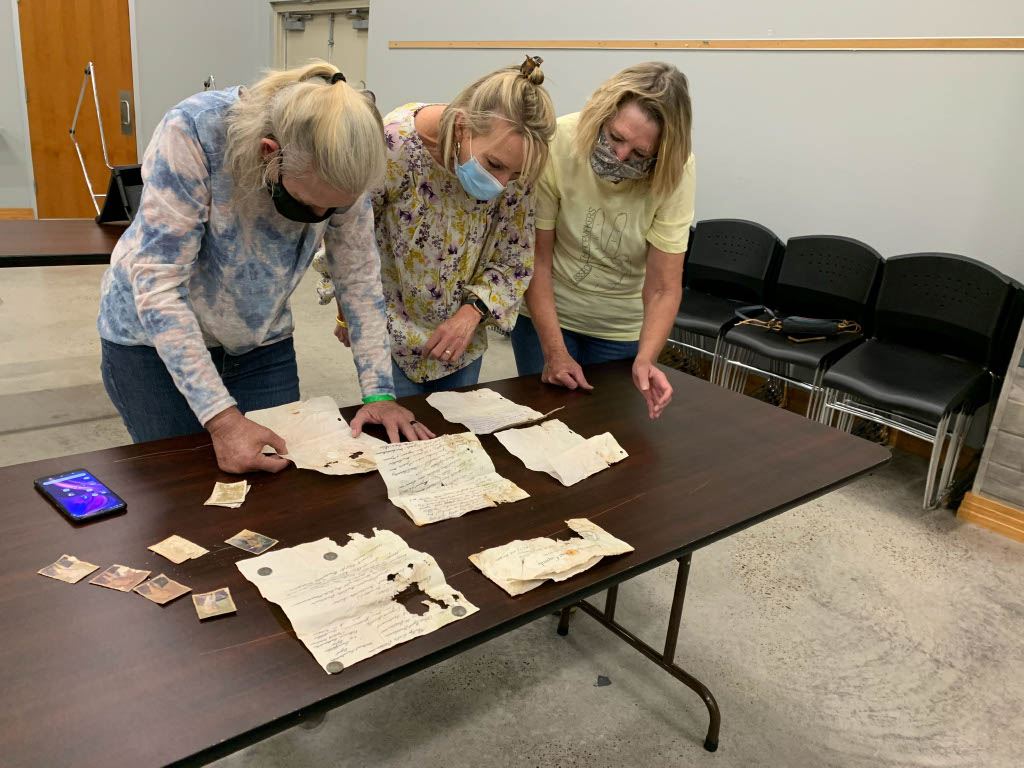 Marsha Brundrett and her family hold up items that were placed in the time capsule by her parents William and Betty Mitchell.  To view the items, click here. 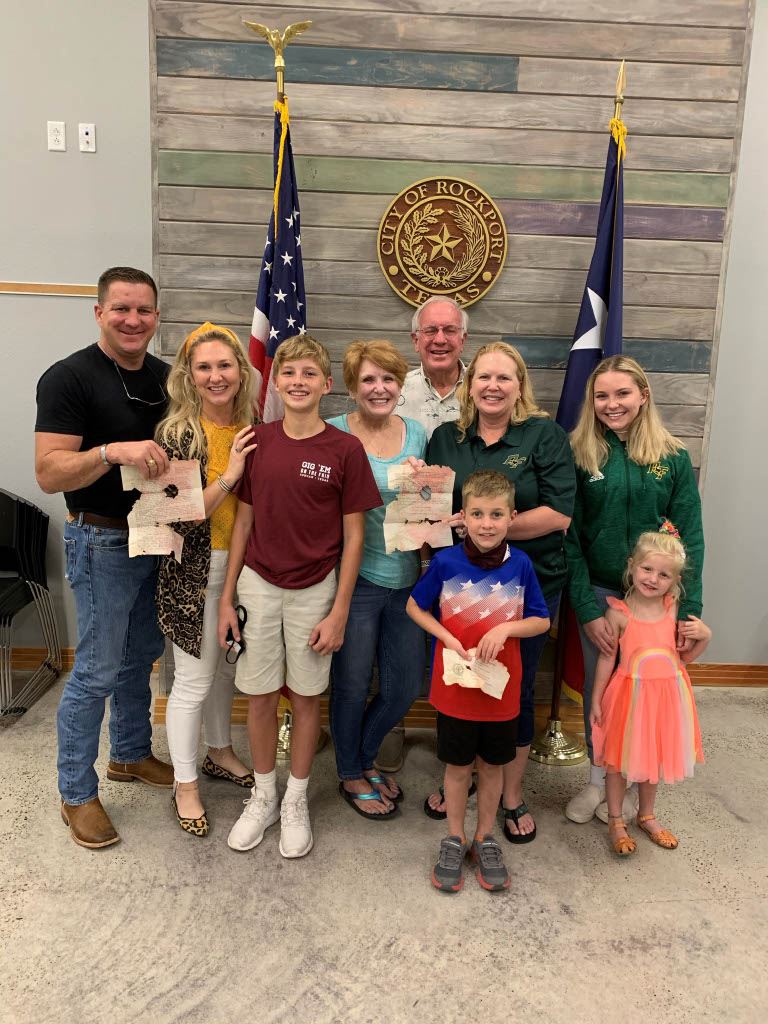 Brothers John and Bobby Jackson and their cousin Molly Jackson McConville (22 cousins in all) review some photographs that were recovered from the Centennial time capsule.  Additionally, Bobby brought his own copy of the Centennial flag to share with Council at a meeting on October 27th, as the one placed in the capsule was destroyed. 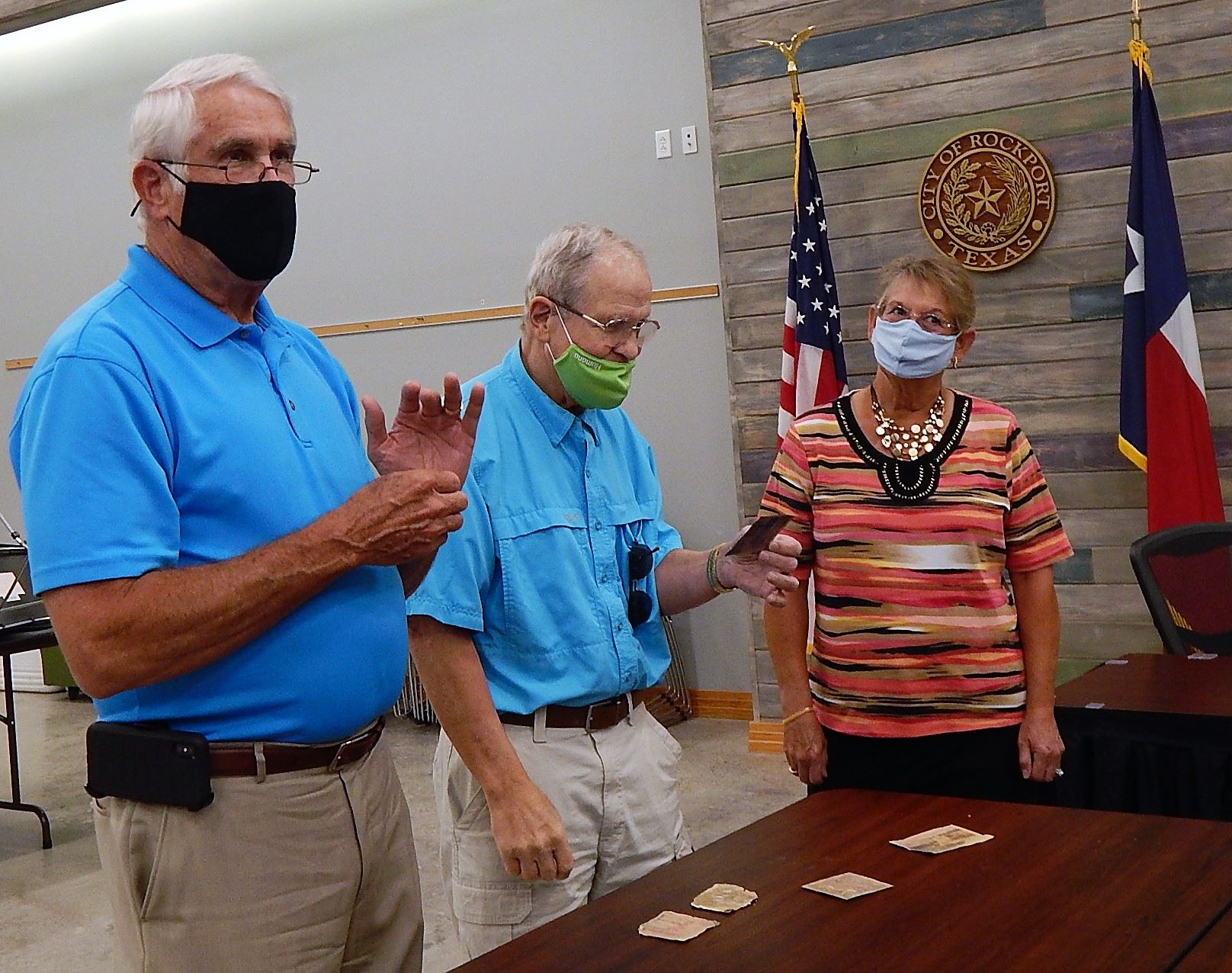 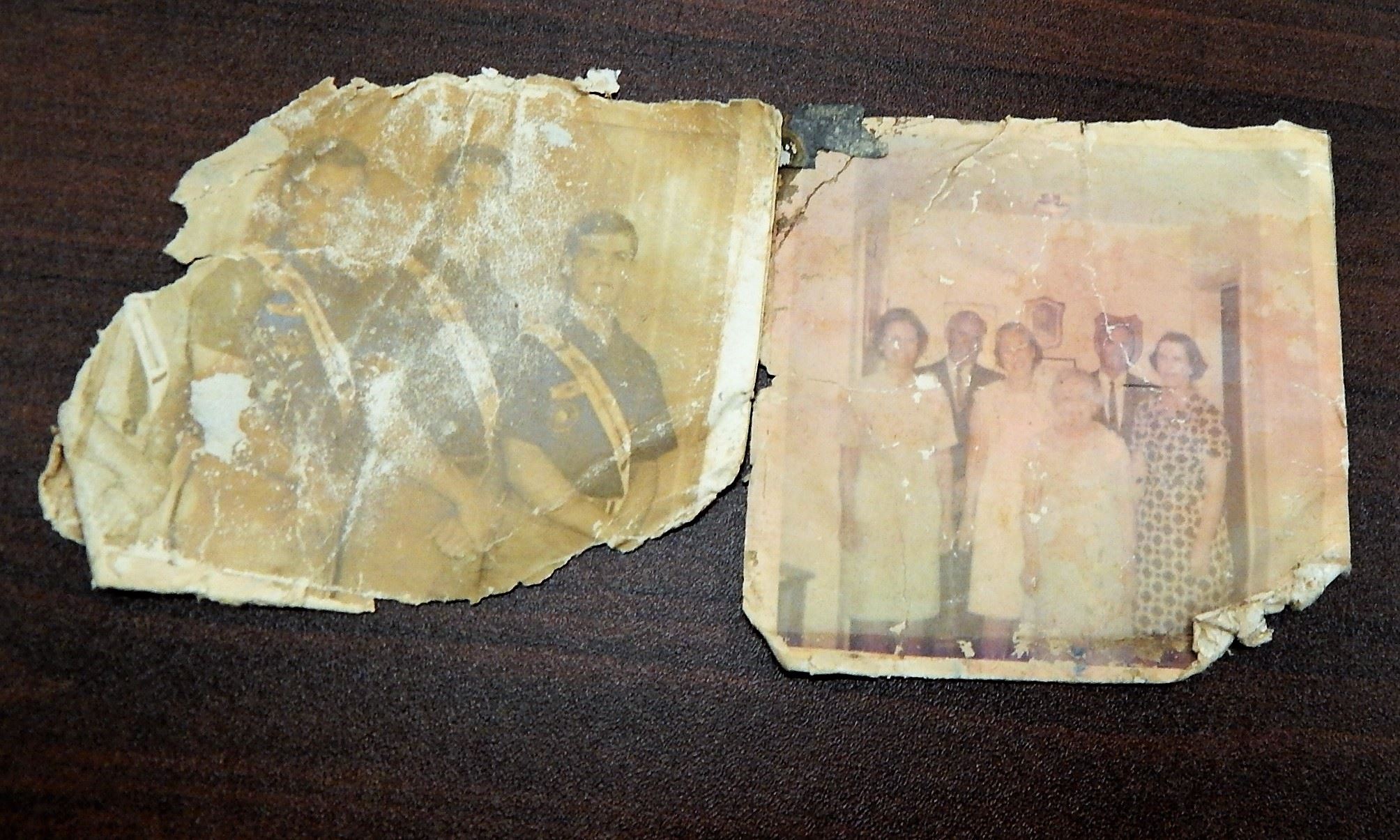 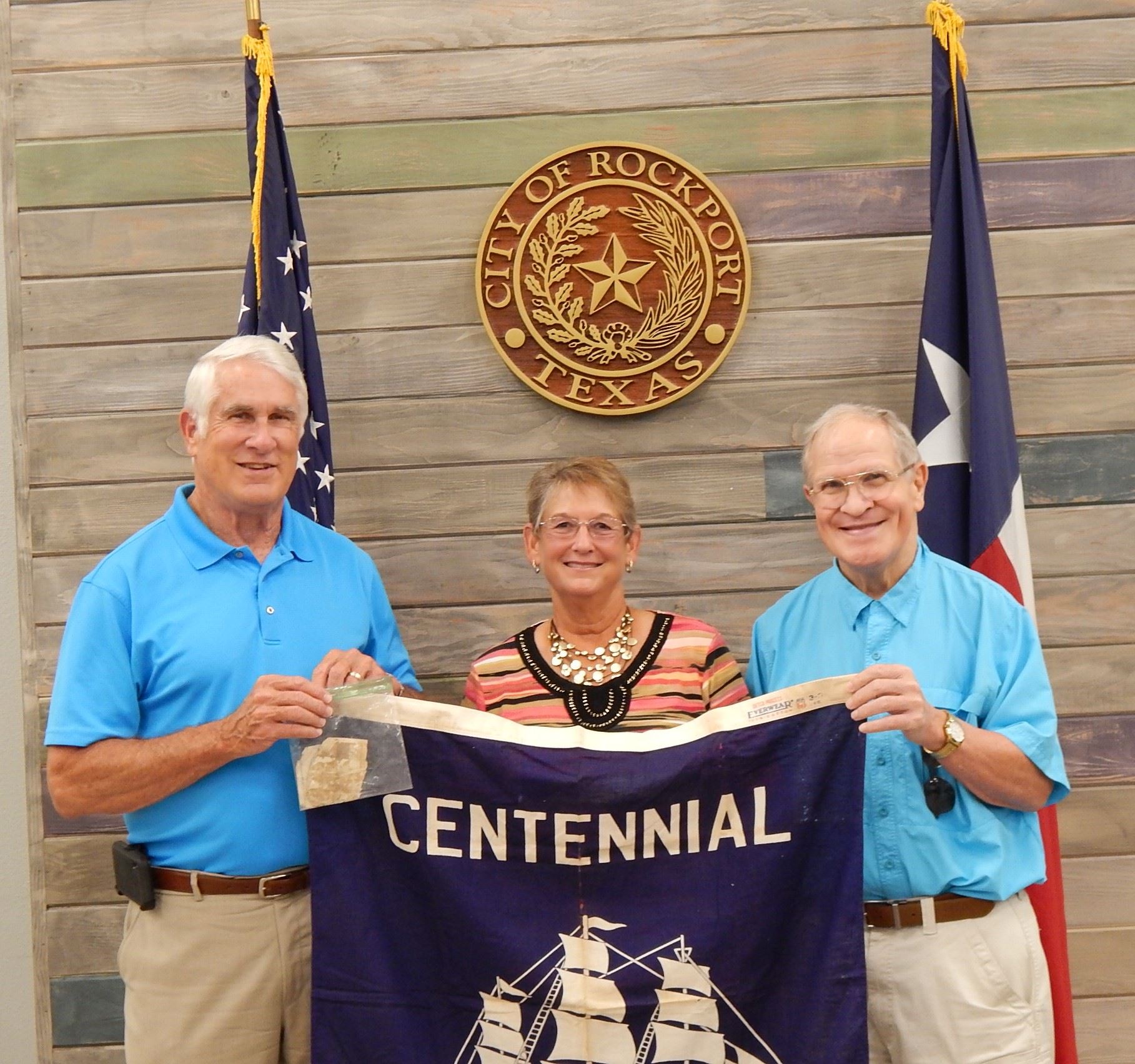 Although the immediate family members of Fred and Inez Bracht have passed on, Susie Bracht Black, the fifth generations of Brachts in Rockport) was able to meet with Mayor Rios to receive a letter addressed to her father and his siblings. 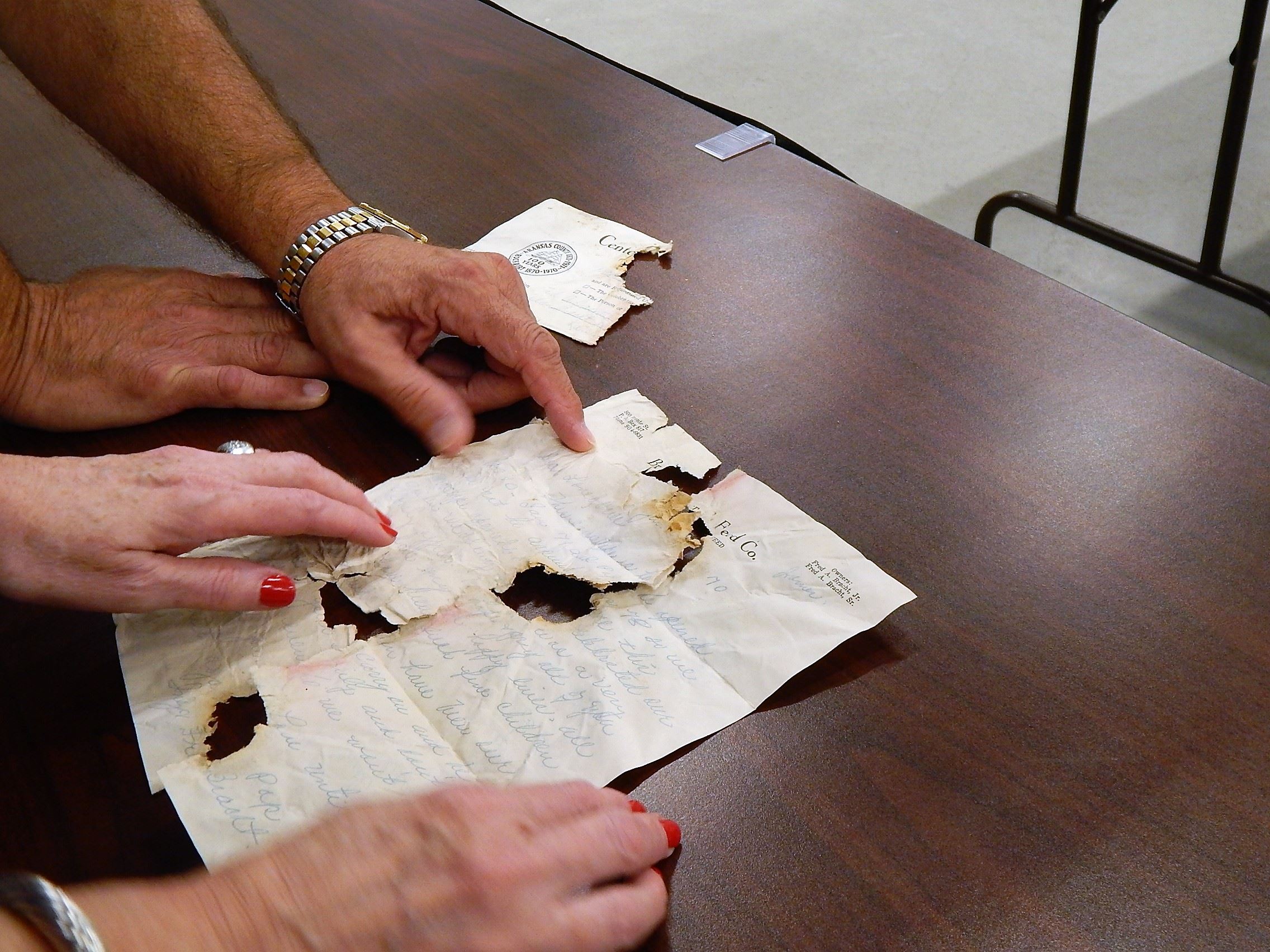 Sarah Belle Smith left a note for the future Auxiliary or Fire Department so they would know someone thought of them 50 years ago.  Accepting the letter are Gillian Cox and Roy Laird of the Rockport Volunteer Fire Department.  After the presentation it was learned that Ms. Smith's great  nephew, Gary Smith, is currently a member of the RVFD. 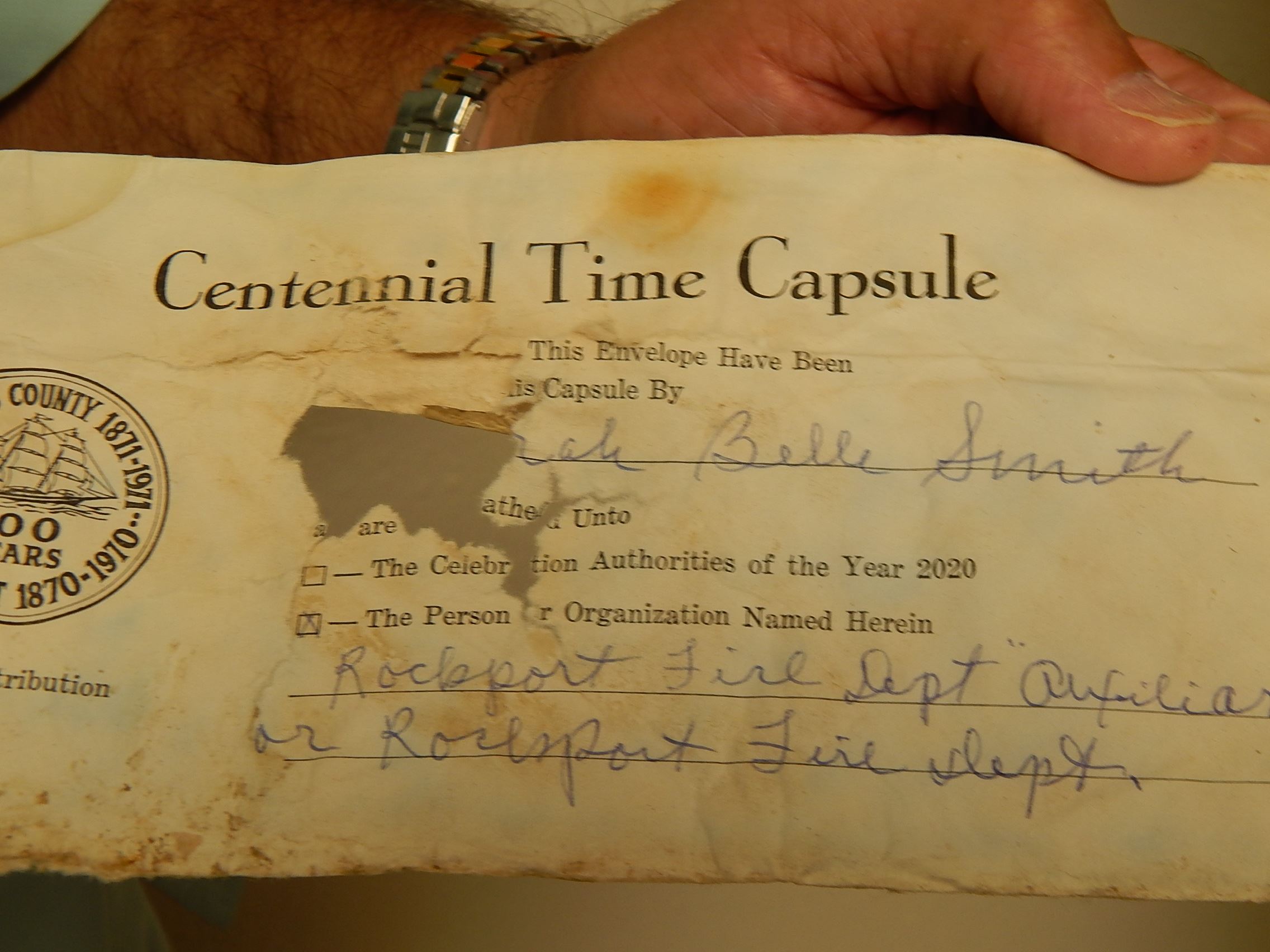 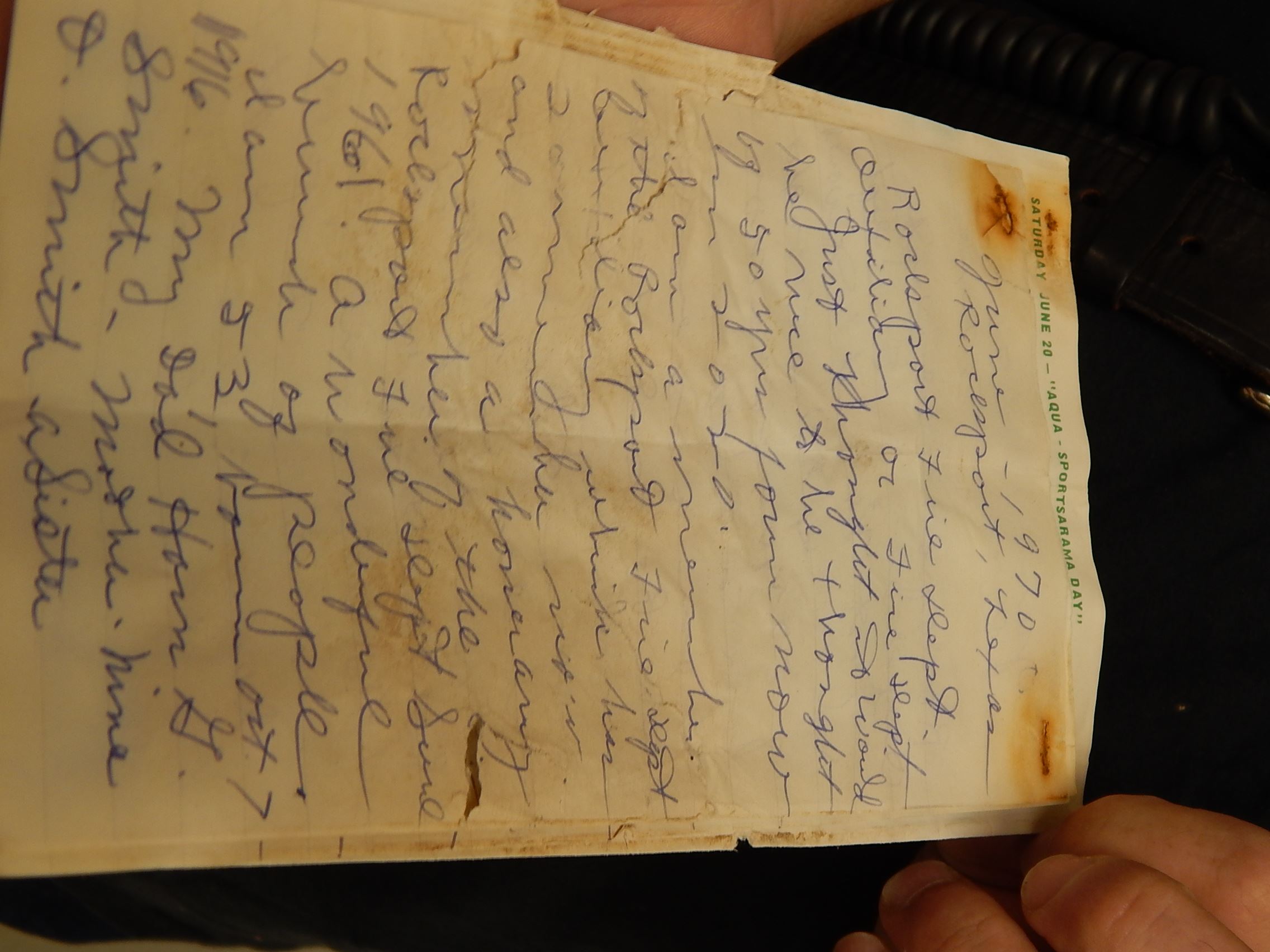 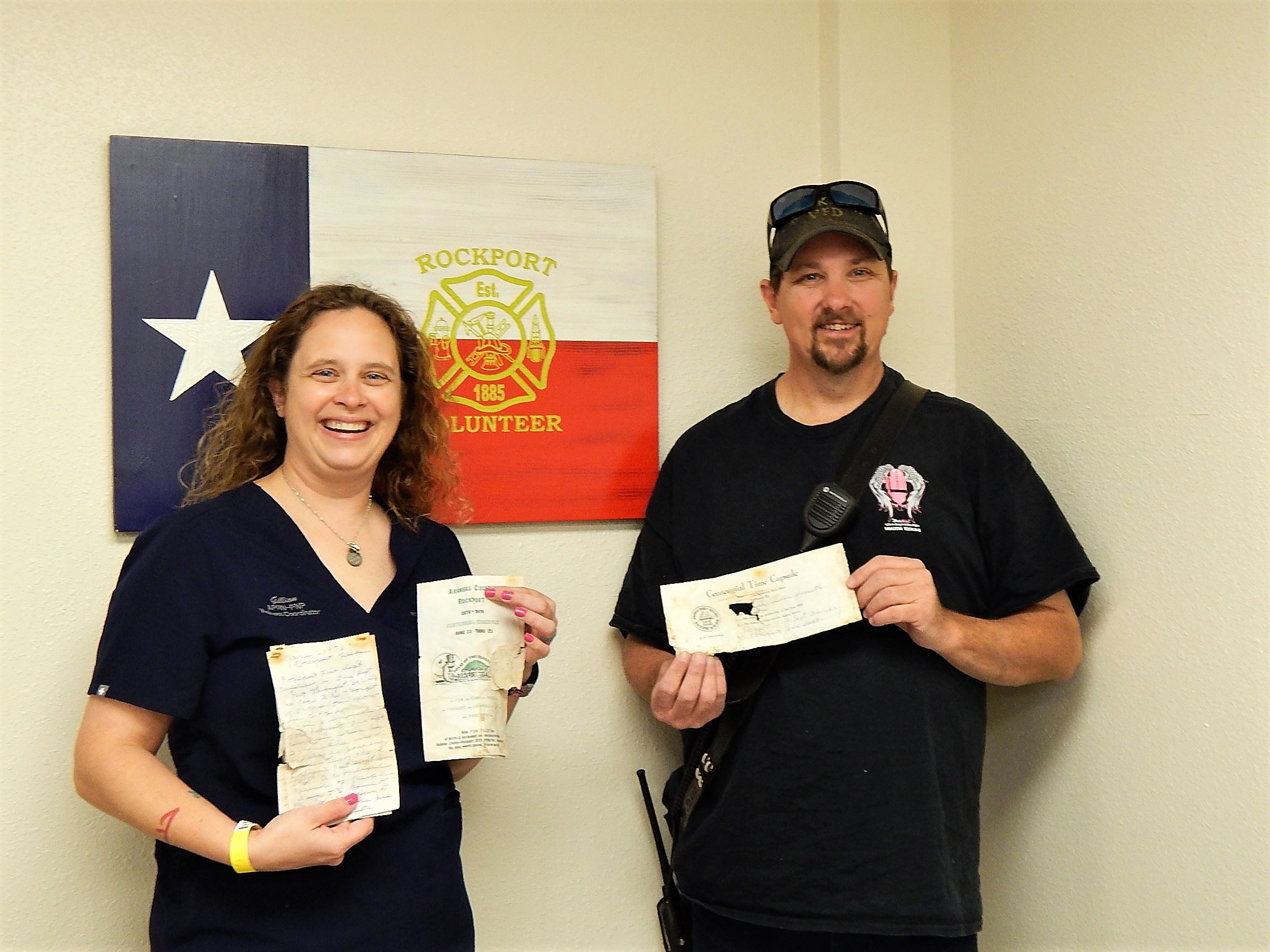 Due to a lot of the envelopes and paper items being damaged beyond repair with water/sweat from within the time capsule, we are not sure where all of the coins came from or who may have placed them in the time capsule.  Some of them are very interesting, including a 1912 Barber half dollar, 1893 Barber quarter, 1941 Mercury dime, and 1912 Liberty Head nickle. 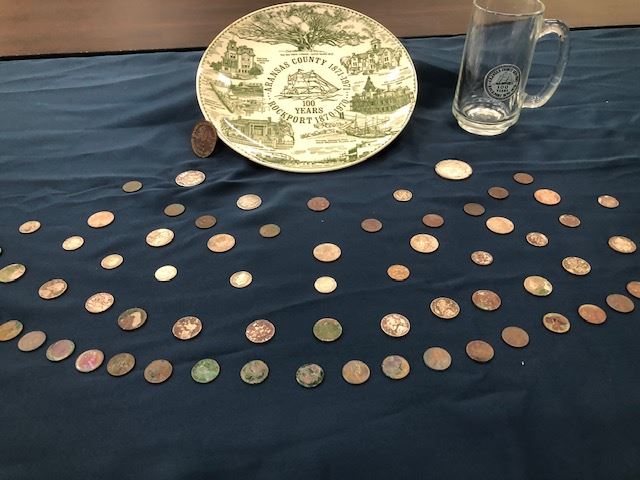 Also within the time capsule were the Centennial glass mug and plate.  The plate includes artistic depictions of the following historical markers:

Below are pages of some of the items presented at the July 28th council meeting.  To view the full packet, click  here. 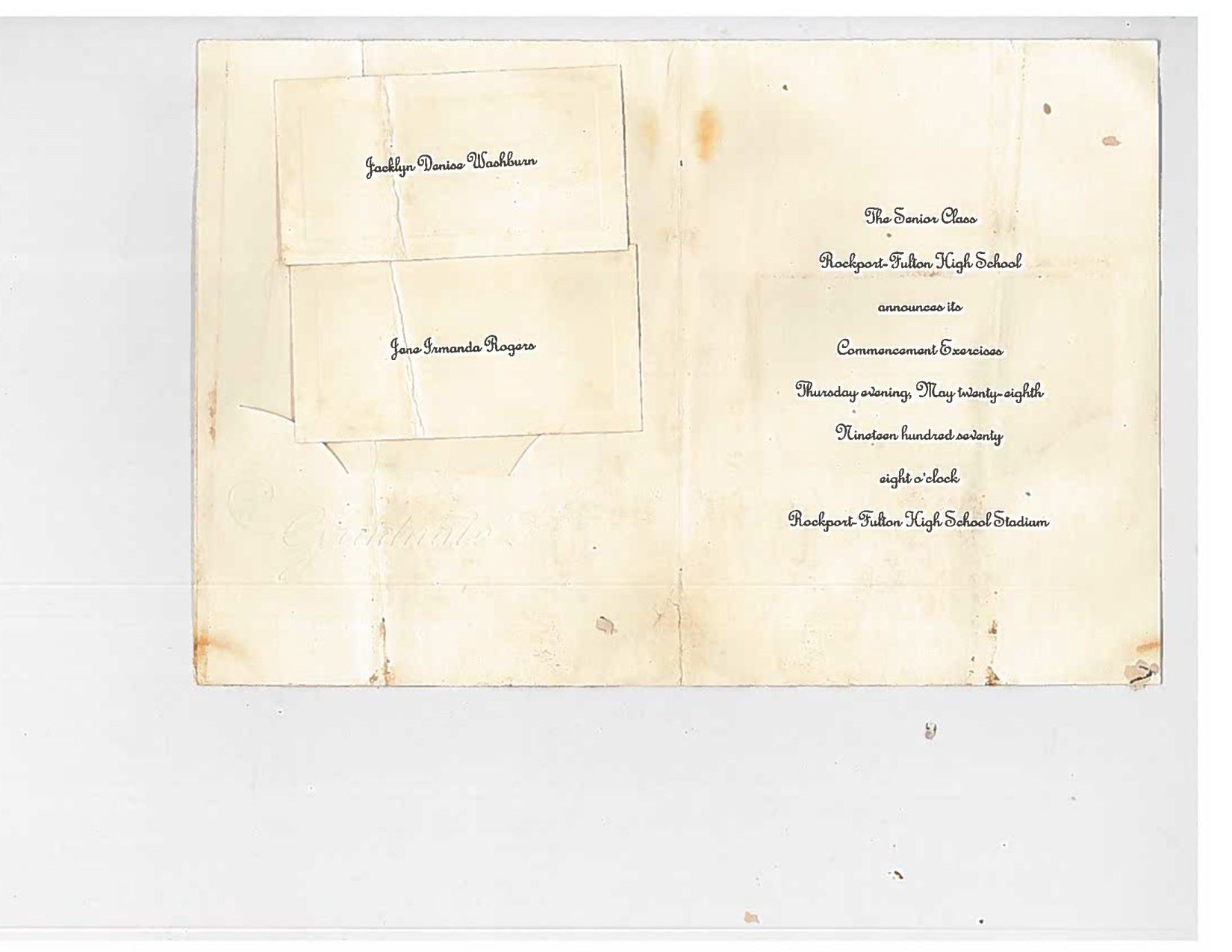 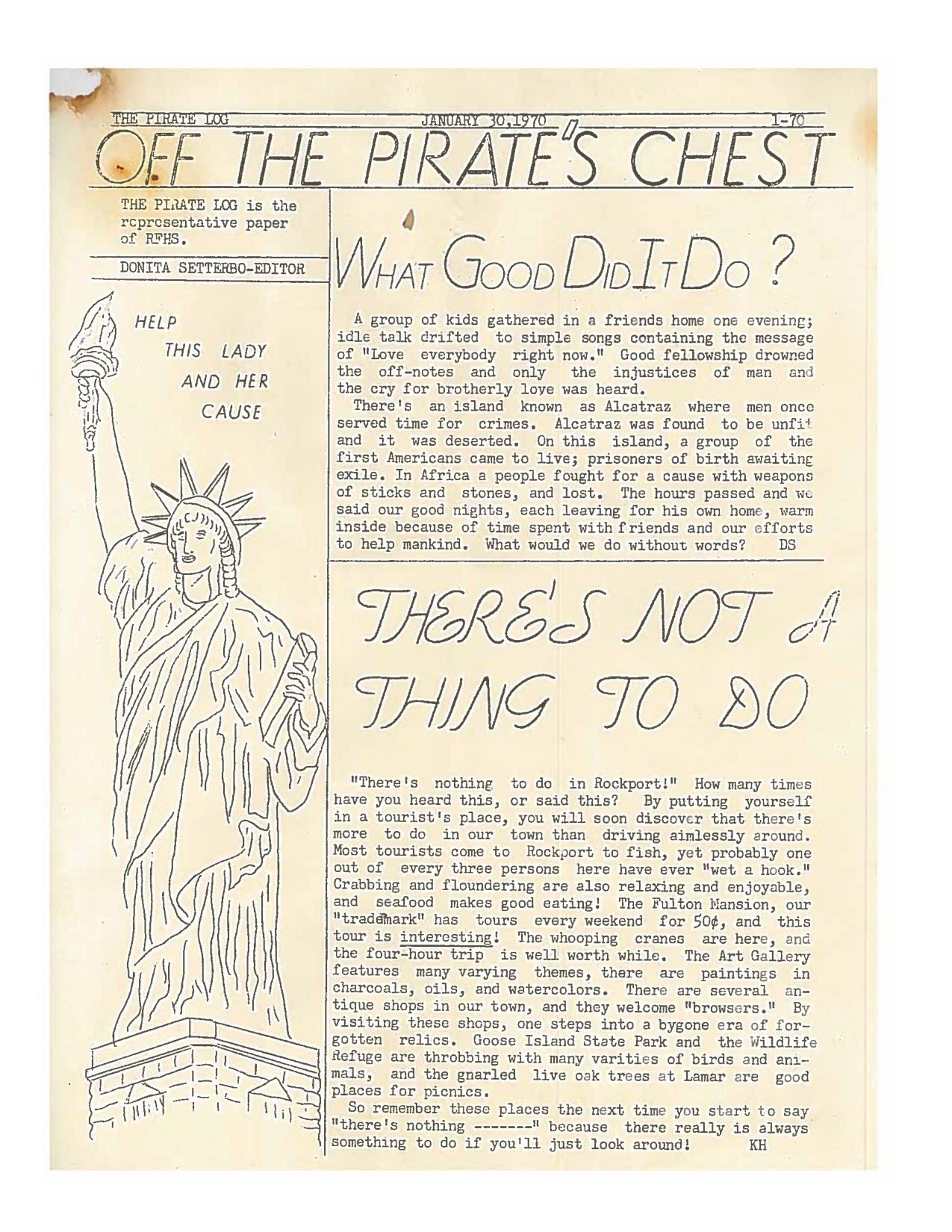 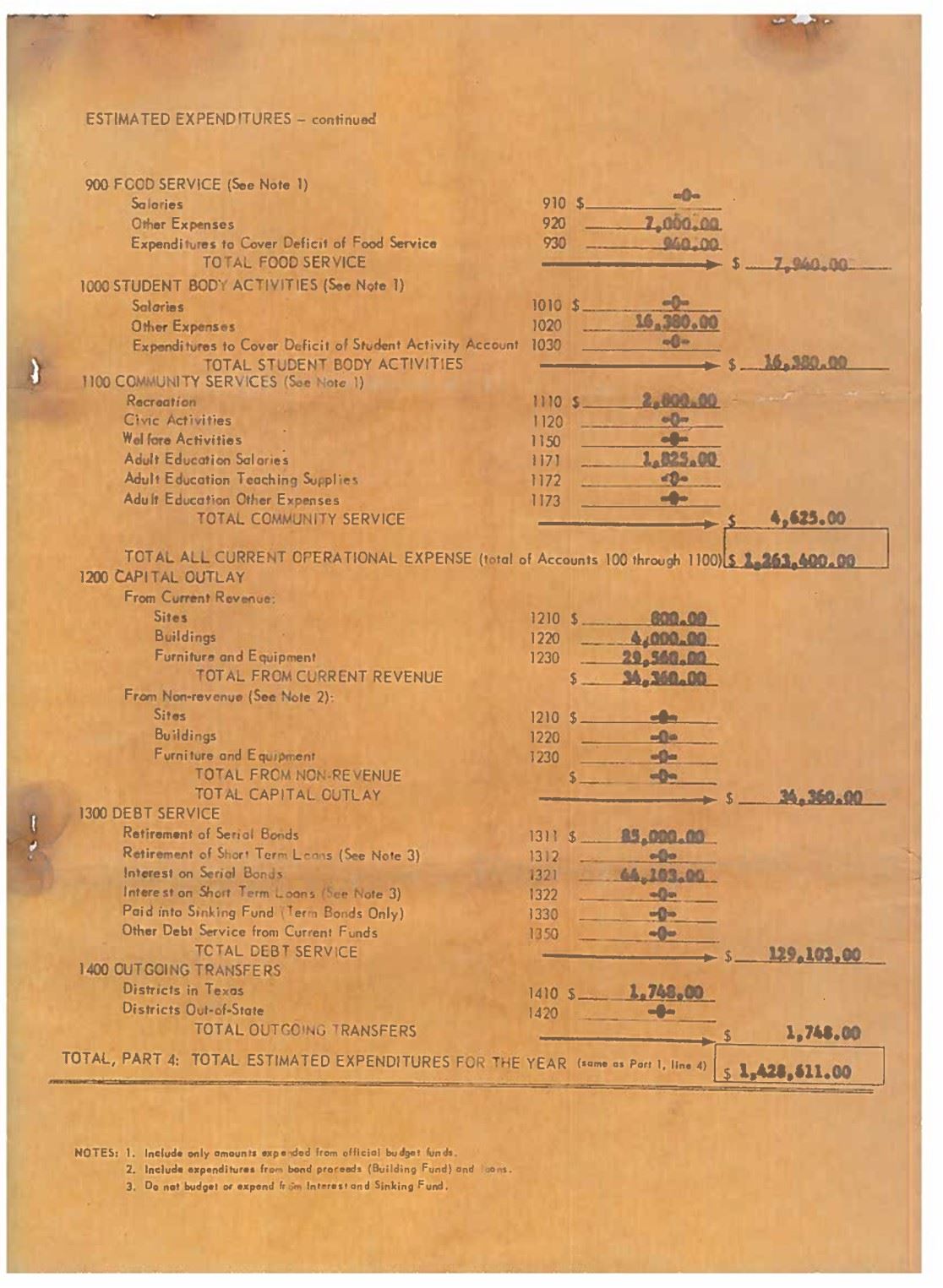 Exhibit E            Aransas County Tax Records (Only a few pages are shown of the more than 2 inches of pages provided.  And it looks as though some were damaged by fire prior to being damaged by dampness within the time capsule.) 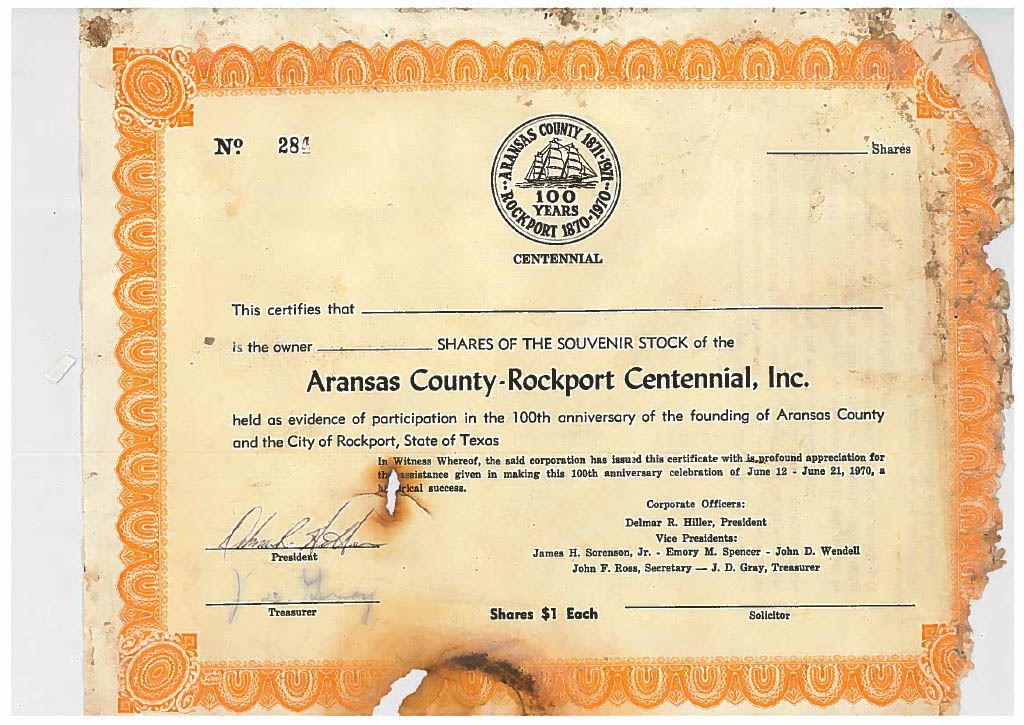 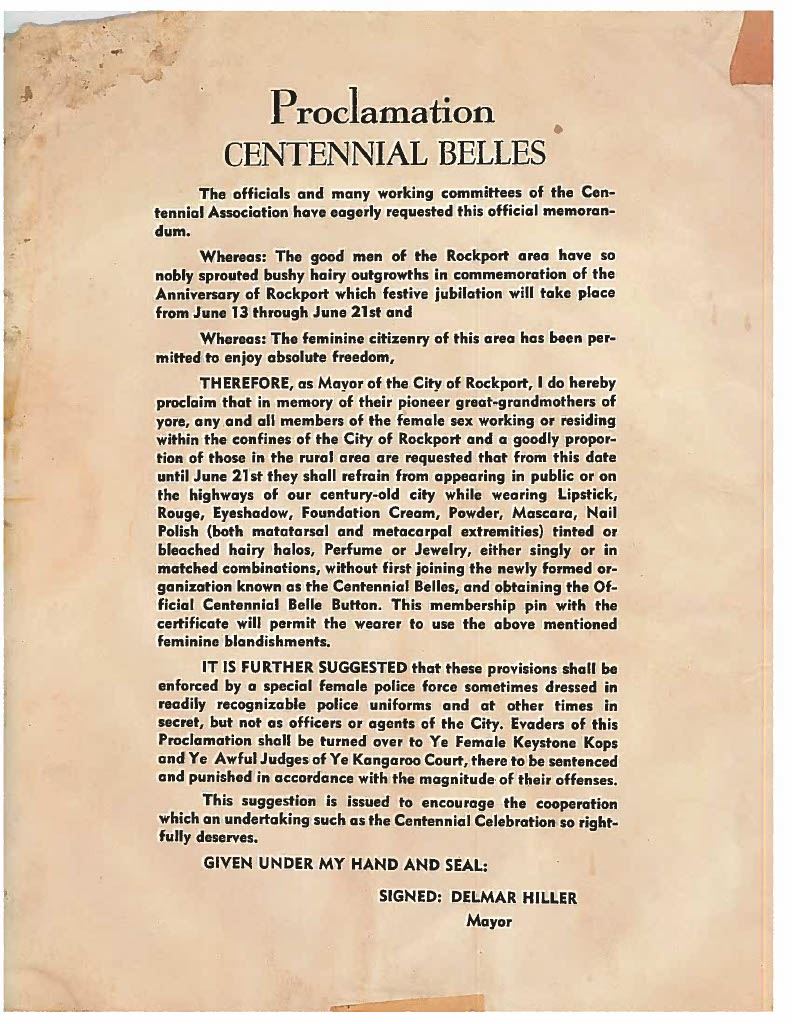 The accompanying exhibits listed below are documents showing ways in which City and County engaged the public in advance to purchase “shares” to help fund the event as well as prepare wardrobe and grow facial hair to be engaged within the event.

Exhibit A Certificates of Shares

Exhibit B Proclamation, Charter, and Certificates for the Centennial Belles

Exhibit C Proclamation, Charter, and Certificates for the Jolly Rogers

With the 7th presentation of items for the time capsule we are looking at some more fun items from the 100th celebration. The buried treasure had clues for the people who bought the maps and allowed the public to have fun searching for the “gold.” Over 250 citizens were involved in the “Bustles to Bikinis” production, which included a few entire families. An audio recording of the event is available above.

Exhibit A Maps of Gold

Exhibit B Tickets to the “Bustles to Bikinis” Production 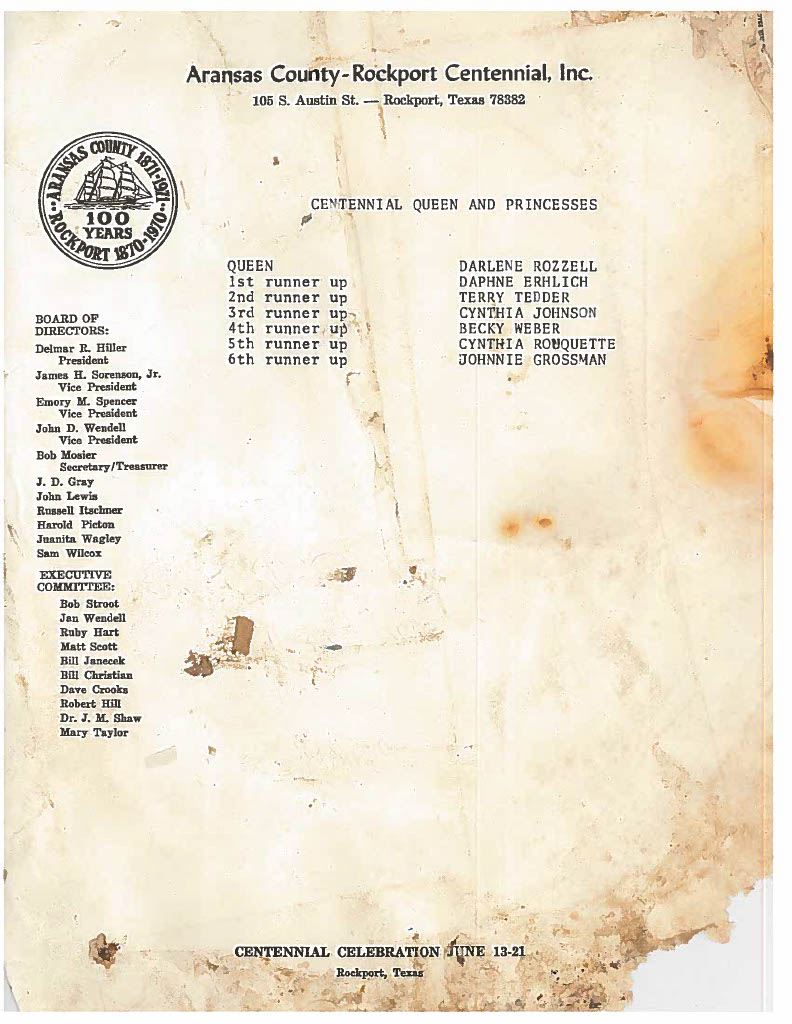 November 10, 2020 - The City of Rockport is not the only entity celebrating its 150th Anniversary this year,  The Rockport Masonic Lodge #323 was chartered on June 18, 1870.  Fifth years ago, members of the Lodge included materials in the time capsule, which were delivered to current members by the Mayor and City Manager. Photos courtesy of The Rockport Pilot. 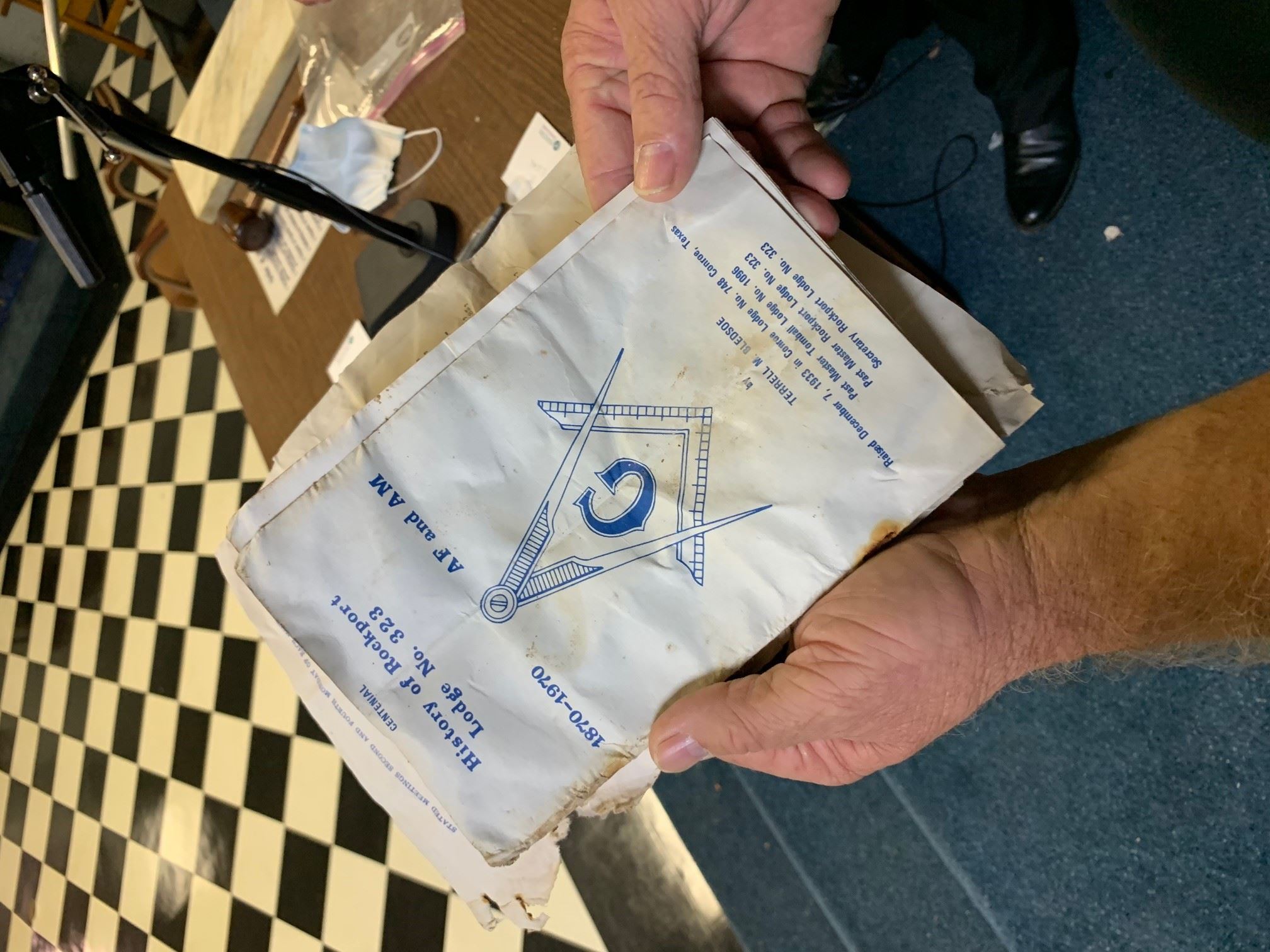 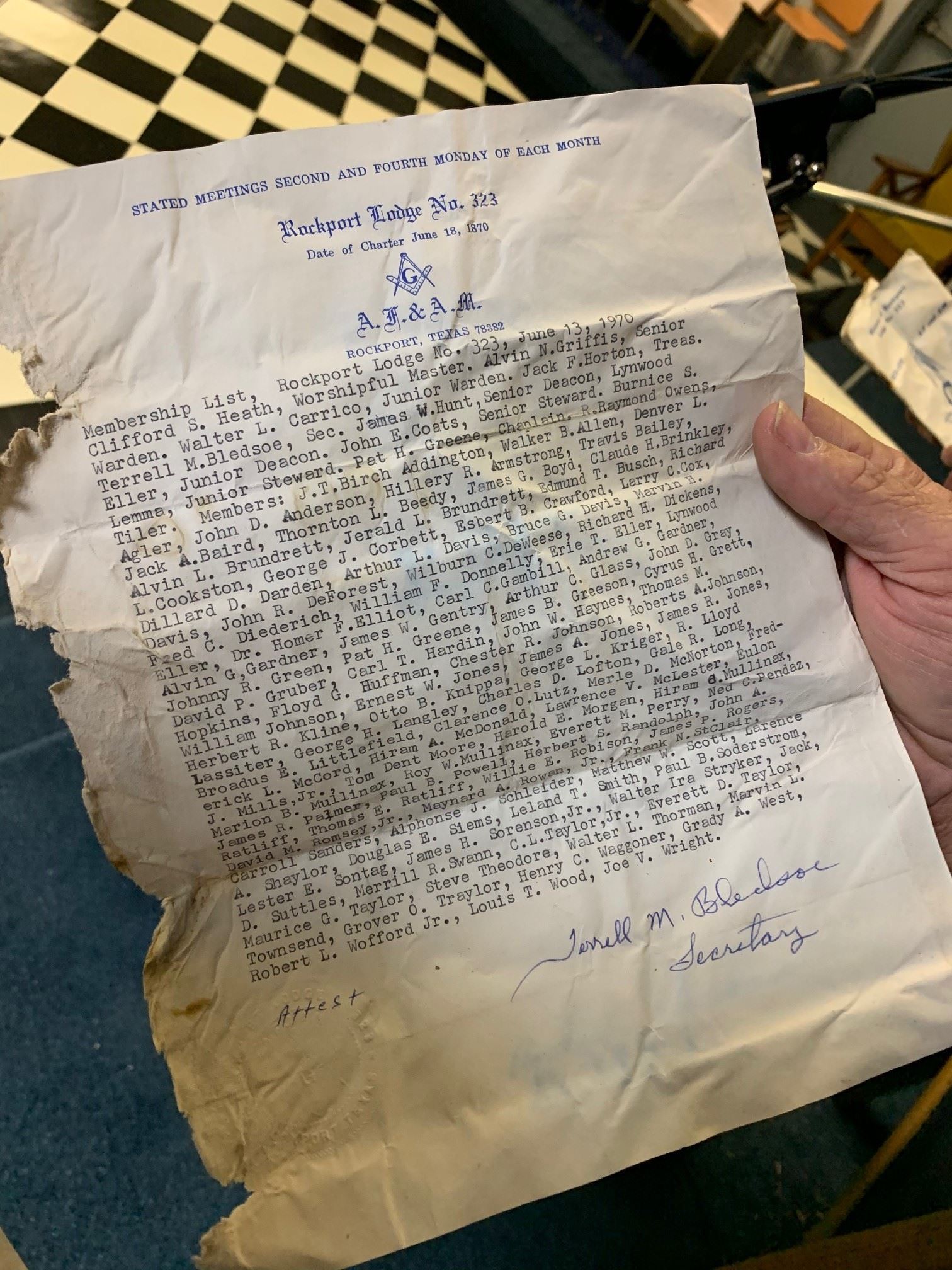